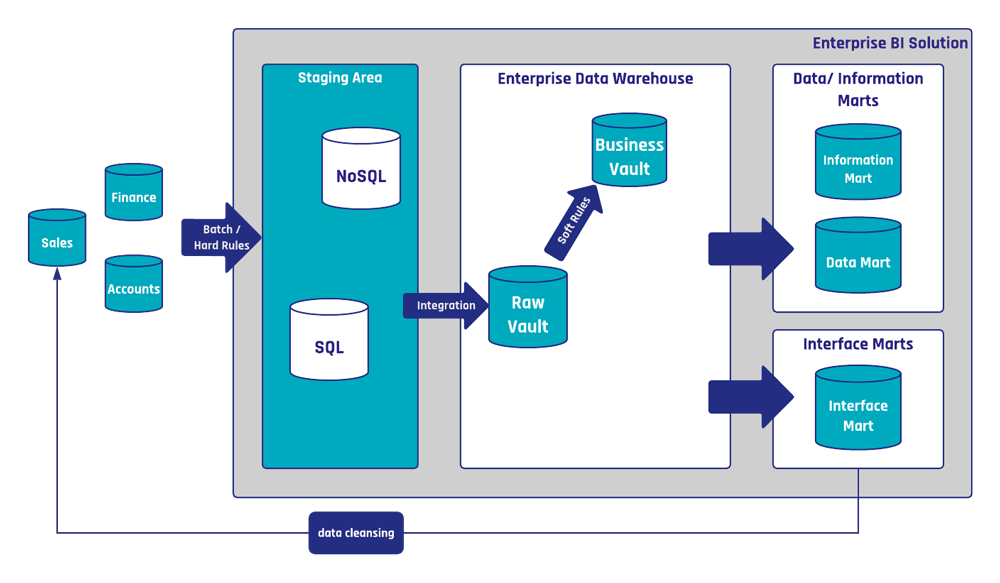 To put it simply, an Enterprise Data Warehouse (EDW) collects data from your company’s internal as well as external data sources, to be used for simple reporting and dashboarding purposes. Often, some analytical transformations are applied to that data as to create the reports and dashboards in a way that is both more useful and valuable. That said, there exist additional valuable use cases which are often missed by organizations when building a data warehouse. The truth being, EDWs can access untapped potential beyond simply reporting statistics of the past. To enable these opportunities, Data Vault brings a high grade of flexibility and scalability to make this possible in an agile manner.

To begin, the data warehouse is often used to collect data as well as preprocess the information for reporting and dashboarding purposes only. When only utilizing this single aspect of an EDW, users are missing opportunities to take advantage of their data by limiting the EDW to such basic use cases. Data Cleansing (within an operational system)

In Data Vault, we differ between raw and business data. Thus raw data is stored within the Raw Data Vault and similarly business data within the Business Vault. Though, within Data Vault 2.0, the Raw Data Vault is used to store the good, bad, and ugly data as it is delivered from the source system. On the other side, the Business Vault can create any truth, for example calculating a KPI such as profit, according to a business rule defined by the information subscriber.

For reporting and dashboarding purposes, data cleansing rules are typically applied to make the data more useful for the task and therefore, in turn, process the raw data into useful information. Though, these business rules for data cleansing can also be used to write the cleansed data back into the operational system. In the best-case scenario, the business rules are applied by using virtualized tables and views within the Business Vault. This cleansed data then can be pushed back into the operational system to implement the concept of Total Quality Management, or TQM, where in which errors would be fixed at the root cause which is often within the source system itself.

Thus, using the EDW for data cleansing can have several advantages. In the case of data cleansing tools for example, it is not always possible to perform complex scripts. As most tools have predefined lists of countries, etc. to clean some selected attributes. Also, most tools are created for the purpose of cleansing data from one operational source system, ignoring inconsistencies between multiple operational systems.

From the Data Vault perspective, data cleansing rules are ordinary business rules. That means, they are implemented using business satellites, often with the help of reference tables. The following figure shows an example for data cleansing using a Data Vault 2.0 architecture, as it is utilized internally at Scalefree. 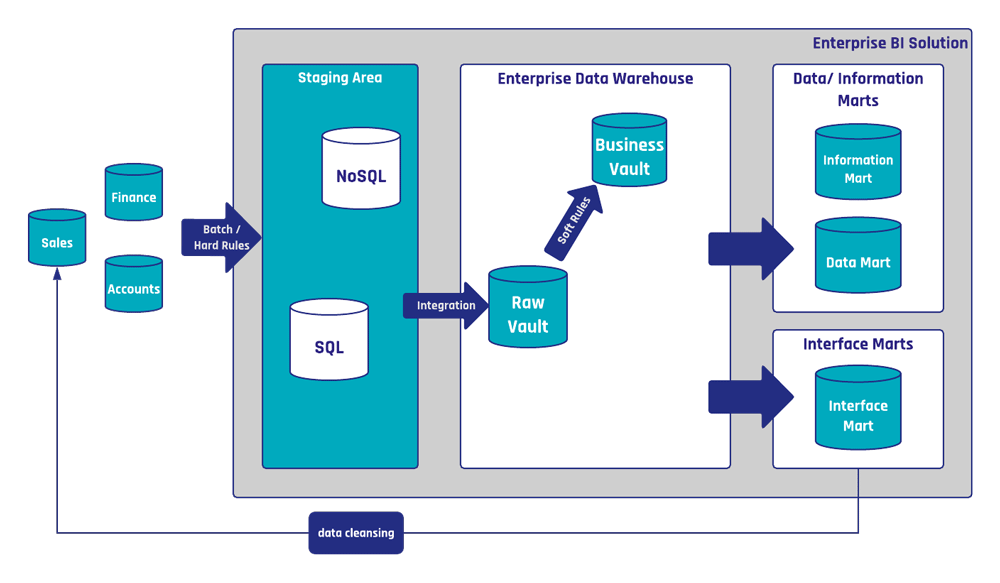 The Scalefree EDW is the central library of data cleansing rules which can be used in multiple systems such as those of the EDW and operational systems. The shown data cleansing process is used among others to cleanse customer records and standardize phone numbers as well as the accompanying addresses. Besides the Information Marts, there is also the Interface Mart ‘Sales Interface’, which implements the API of the sales source system and applies data cleansing rules from the business data vault. A scheduled interface script loads the data from the interface mart into the source systems API. In this particular case, the script is written in python.

With the flexibility of Data Vault, organizations can apply new capabilities, which go beyond just the standard reporting and dashboarding. Thus, the data warehouse can be used to apply data cleansing within the operational systems by following centralized cleansing rule standards.

If you would like to learn more about Data Vault Use Cases and the latest technologies from the market, a good opportunity to do such is found within the World Wide Data Vault Consortium (WWDVC). Here you will be able to interact with the most experienced experts within the field. This year, from the 9th to the 13th of September, the conference will be held in Hanover, Germany for the first time.

There, Ivan Schotsmans will talk about Information Quality in the Data Warehouse. In which, he will present how to handle current and future challenges regarding Data Warehouse architecture, how to move to an agile approach in the manner of implementing a new data warehouse, and how to increase business involvement. To not miss out on the opportunity, register today as to not miss his and other interesting presentations that will be held by Wherescape, Vaultspeed and many other vendors and speakers!